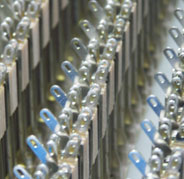 Recent advances in audio mixing technology have brought about significant improvements in functionality and signal quality. As a result, traditional patching systems, based on the original American Engineering Society (AES) digital audio specification, are increasingly inadequate to cope with the higher levels of sensitivity. By reducing the breakthrough voltage of the socket from around 50mV to 5 mV, DEM Manufacturing is the first to bring its jackfields in line with the latest technology.

DEM Manufacturing has taken the lead and made this change in direct response to feedback from the market. “Traditionally, the through-signal patch is broken when a patch cord jack plug is inserted into the socket, regardless of fader position,” explains Alan Holden, Business Development Manager of DEM Broadcast Products, “Now, the latest generation mixing equipment is so sensitive that it is able to detect the breakthrough signal, so that the audio sources can appear to remain on the mixer even when patched. By reducing the breakthrough signal of our panels right down to 5 mV, we have solved this problem for sound engineers.”

All the models in the comprehensive range of bes audio jackfields - in sizes from 2x24 to 4x24 - now feature the new low-breakthrough jack socket as standard.

DEM Manufacturing also supplies a range of high quality bes audio patch cords in a choice of lengths from 12 to 72 inches.