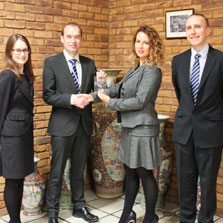 DEM Manufacturing is delighted to announce that Anglia Components Limited have been named their 2015 Stockist of the Year.

Since being appointed as a distributor for three of the DEM Manufacturing product ranges, Deltron Components, Deltron Enclosures and Roxburgh EMC, in April 2014, Anglia have made excellent progress selling the products via their online website, Anglia Live, and through more traditional channels.

Tom Downing, Product Manager at DEM, recently presented the award to Anglia and commented: “Anglia has been completely committed to our product ranges from the beginning and we wanted to present this award to them in recognition of their hard work and efforts. We look forward to progressing our partnership with Anglia and hope to see continued success in the future."

Anglia began their relationship with DEM by stocking 330 lines, which they continue to maintain today along with new lines such as the recent Deltron Heavy Duty Die Cast Aluminium Enclosures. This makes the Anglia stock profile of Deltron Components and Deltron Enclosures one of the most comprehensive in the industry.