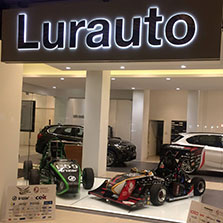 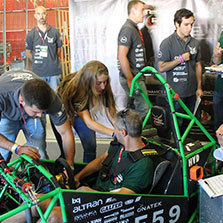 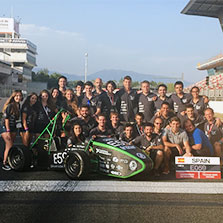 Following on from our story earlier in the year, Tecnun SEED Racing have been updating us on the progress of their electric single seater racing car for Formula Student.

Tecnun SEED Racing is a group of engineering students at the University of Navarra in Spain, designing and building their own racing car to compete in events amongst students across the globe. Deltron was pleased to support the team by donating three enclosures to solve their EMI issues. (Read the full story here).

The Tecnun SEED Car
Tecnun have been improving the performance of their car and recently summarised its current strengths and areas that still require improvements for the year ahead. “Regarding the car, we would like to outline its power, fidelity and toughness. However, there still is great room for improvement in several fields. For example, the battery case has shown some problems throughout the year, so this will certainly be something to improve this season. On the bright side, those responsible for this area rapidly located the problem and have made some research on other teams’ set up, ending up with a solution that will be fabricated this month.

“The strength on the mechanical area has been its toughness during the year, not presenting many issues during competition. There are slight changes that will be made on the next TSR17, based on what we have learnt in competition combined with a weight loss of the different components.

“Some changes will also be made to the electronics, mainly focused on the redesign of some components such as the PCB’s.”

In November, the team made an exciting announcement “We are very proud to announce that our single-seater TSR17 is on display at Lurauto authorised dealer, in San Sebastian. If you decide to visit it, in Ramon María Lilí street, you will be able to see the amazing single-seaters Tecnun has released.”

The Tecnun SEED Team
During September, new members joined the team, bringing new ideas and eager to show their commitment and enthusiasm towards the challenge.

The team feels that the competition is preparing them well for their future profession. “Days [spent learning] at the circuit are much more stressful and intense [than days in the workshop], which gives place to the need of a faster problem resolution, broadening your professional development as an engineer.”

Deltron would like to wish Tecnun SEED Racing the best of luck for the year ahead.