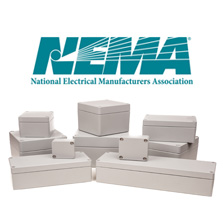 NEMA ratings and standards was developed for electrical enclosures to ensure safety, compatibility and proper function of electrical products.

NEMA ratings indicate a fixed enclosure’s ability to withstand certain environmental conditions. The acronym “NEMA” refers to the National Electrical Manufacturers Association, which is the largest trade association of electrical equipment manufacturers in the United States.

What is the difference between an IP and NEMA rating?
NEMA ratings and IP ratings both define degrees of protection against substances such as water and dust, but use different test methods and parameters to define their enclosure types (NEMA 250 and IEC standard 60529).

NEMA ratings are geared towards industrial applications, primarily used in North America, unlike IP ratings which cover a broad set of applications worldwide. NEMA ratings also include supplementary protection standards against corrosion resistance and atmospheric gasses and distinctions between hazardous and non-hazardous environments, IP ratings on the other hand only cover protection against the ingress of water and solid objects.

Enclosures at Deltron
At Deltron Enclosures, we can offer IP54 enclosures with a NEMA rating of 3, 3S and 13*, which are suited to light duty environments that may require some level of protection from dust, and means water splashing against the enclosure from any direction will have no harmful effect.

For more demanding applications, we also manufacture IP66 and IP68 enclosures with a NEMA rating of 4X*. These are suited to industries where the applications are located in tough environments and therefore ingress protection is a priority, they also offer protection against powerful water jets from any direction.

In addition, our IP66 and IP68 enclosures are available in a heavy duty version for a durable enclosure. The hardwearing enclosures are designed for tougher environments, often used for deep water applications, or when the engineer requires resilient casing for the electronic components.

See the attached document for a comparison chart on IP and NEMA Ratings.
*Approximate comparison, always check the technical specification.