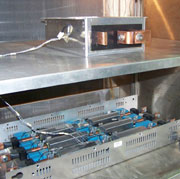 Scunthorpe, UK 15 July 2009 - Roxburgh EMC EMI filters have been upgraded to meet the specifications of the demanding UL 5th Edition, with increased short circuit ratings and more rigorous temperature tests. DEM have made the changes required to the Roxbu

Commenting, John Hutchinson, DEM Manufacturing Product Engineering Manager, said, “These standards are mandatory in North America, but are recognised in many other parts of the world. Customers specifying a Roxburgh filter today can rest assured that it allows their product to be qualified to the most demanding electrical safety standards in the world, now and for the foreseeable future.”

UL Fifth Edition is more focused on EMI filters and makes significant changes to the Fourth Edition, including imposing further stringent tests. To meet the standard, DEM has increased the short-circuit rating capability of their filters to exceed that stated in UL1283, and now meet the UL508C standard fault current levels.  Depending on the current rating, Roxburgh filters can now withstand brief exposure to currents of up to 85KA without shattering. This capability better serves the drives, power conversion and industrial power-circuit sector who demand their use on higher available fault-current power lines.

Roxburgh EMC filters also bear the mark of approval to Canadian Standards. This demands extensive climactic endurance tests, to confirm that the quality of materials, workmanship and components are second to none. These tests include baking the products for 1000 hours whilst exposed to twice their rated voltage, and then conducting a series of electrical safety tests.