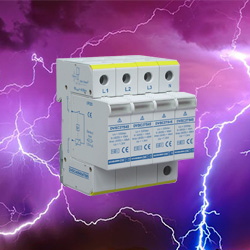 UK manufacturer of the Roxburgh EMC filters and surge protection range, has called for greater awareness of the first amendment of the 17th edition. Implemented in January 2012 it covers, and often requires, the use of surge protection.

Surge Protection Devices (SPDs) were historically not required by the BS7671 Wiring Regulations, despite the vital role they can play in protecting electrical and electronic equipment.

The surge protection devices available from DEM Manufacturing offer high levels of protection from damage caused by high energy short duration electrical transients. These are typically atmospheric in origin, caused by nearby electrical storms for example, or the result of switching inductive, capacitive and resistive loads. Transients can cause a variety of problems from equipment failure to serious electrical fires and damage to distributions systems.

BS7671 17th Edition Chapter 44 covers protection against voltage disturbances and electromagnetic disturbances. Section 443.2.4 in particular deals with protection against overvoltages resulting from switching or atmospheric factors. It details the types of installations where risk assessment reports indicate the need for SPD, as well as other areas with lower levels of consequences, where calculations can be used to determine the need for SPD installation.

Chapter 53 deals with protection isolation, switches, control and monitoring, with 534.2 determining specifically the selection and erection of surge protection devices. Two specific types of SPD are referred to in the regulations as Type 2 and Type 1 -dependant on the nominal discharge currents expected and the location of the protection within the system.

"The 17th Edition exists to help protect individuals and industrial, commercial and domestic property from electrical damage," explained Diane Kilminster, Marketing Executive at DEM Manufacturing. "In fact, one might argue that all electrical design is there to mitigate for failures in the system. Surge protection devices play a part in doing that and we're glad that this is now formally recognised in the regulations," she concluded.